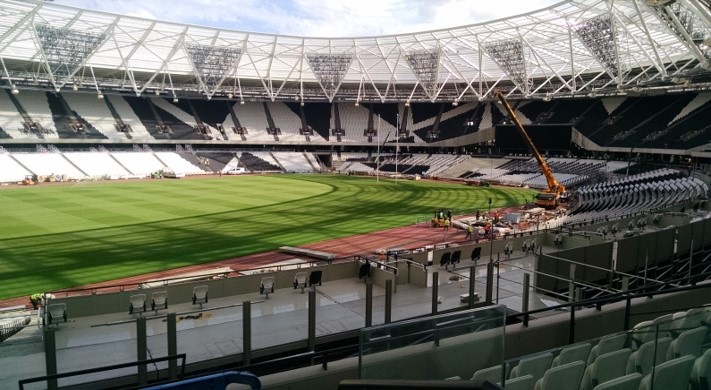 The London 2012 Olympic Games was the catalyst for the country being brought together once again to support the Great British athletes, as they competed in the game’s events. The Summer of 2012 was largely a success in and outside the complex. But what’s changed in the last 5 years since the games ended in the prestigious London Stadium?

The main change to the stadium is the colours of claret and blue running through the seats and inner walls. West Ham United moved into the ground shortly after the 2012 games, it has been a transitional period for the club since moving from their old home of The Boleyn Ground. Largely the East London club has benefited from the move.

Despite the stadium being predominantly home to a football club, it is still used as an Olympic track. West Ham moved their first two matches of last season to play away, which they had to do because it was in their own contract for a major event to be held there every few years. Not only that, recently the stadium had been home to the events of London 2017 and the World Para Athletics.

56,000 people packed into the London Stadium who came to witness Mo Farah repeat his glorious Olympic 5,000 metres and 10,000m double at the same venue – unfortunately, it was not meant to be. Usain Bolt also suffered, as he bowed out of his respective 100m farewell.

As these fans will tell you, there isn’t a bad seat in the stadium! There were people from the supporters club all round the stadium during the world para athletics and it’s a good view pretty much wherever you are. As an athletics stadium it’s still one of the best in the world and it’s definitely no worse than it was before London 2012.

The transition between football stadium and Olympic is pretty effective, too. Apart from the obvious claret and blue seating, the signage is able to come down with the stadium being made to accommodating whatever the event it’s used for.

Our company installed five new kitchens, 220 new fire doors and 700 metres of skirtings. As well as the refurbishment of the stadium interior and installation of new pay points within the ground.

At Chisholm & Winch we are proud to have been involved with the re branding of the stadium. With Over 36 years of building excellence, we’ve built a reputation for quality work, whether as a main contractor on new build projects, or a subcontractor working to a project management company. Whatever the project, we build value.

﻿
We use cookies to ensure that we give you the best experience on our website. If you continue to use this site we will assume that you are happy with it.OkRead more